This workshop is the first in a series of four supported by a NYU CDCF grant, that adopts an experiential approach to the teaching of Great Texts in the Humanities. .  Here, adopting a Vicchian notion that we can only know what we have created, we will be exploring the meaning of mimesis, poiesis and eros through the practice of dance. We start by asking why dance was one of the four major components of curriculum in Plato’s Academy in order to investigate dance as a creative and cognitive practice in Plato’s metaphysics as well as epistemology.

Eros, Mimesis, Poiesis  investigated the three key notions in Plato’s philosophical texts through dance practices.   It established that dance was included in the Platonic Academy’s curriculum, as well as in the education of the guardians because, according to Plato, it is through dance that one leas to recognize measure, numbers, and what is rational.   In The Republic, Plato’s dialogue on Justice and a privileged text of the liberal arts, he  discusses the importance of an education in dance for a just and well ordered social and political life. The curriculum introduced the students to a philosophical world view where the mathematics of music and dance were fundamental to understanding the universal system.  Dance, through a mimesis, or an imitation of the movement of the heavenly bodies, teaches men the “lore of one and two,” thus measure, rhythm, numbers, calculations, rationality and the very possibility of thinking.    In the beginning was Dance, because for Plato thinking — that is, the knowing of the most abstract concepts — begins with movement of the celestial bodies and their imitation in communal dance. Dance belonged to the platonic curriculum, because it prepared the student for thinking, for recognizing measure and what is rational.  All forms of knowing — scientific, rational, conceptual — in fact had their origin in dance. The second and third terms of the trio — eros and poesis or creation — are intimately related, and are discussed in Plato’s Symposium. After a lecture and close reading of the original text of Plato, two practical movement and dance exercises that I created in close collaboration with Courtney Escoyne (a former student and Tisch Dance major) translated these abstract concept into an practical workshop.

Mahnaz Yousefzadeh teaches global humanities. She has taught at NYU’s Washington Sq, London and Florence campuses since 2002.  She is the author of City and Nation in Italian Unification (Palgrave Macmillan,  2011) and of Florence’s Maiden Mediterranean Voyage (Olschki, forthcoming), as well as articles on the history of interaction design. In her teaching of philosophical and literary texts, she adopts an experiential approach.

Martin Reichert has been teaching at NYU since 1989.  A comparatist by training, he has taught at Würzburg University, Germany, and at La Pietra, Italy.  He organized the 2010 Fall of the Wall Colloquium at NYU.  He has published on Gandhi, Girard, and German film.

Courtney Escoyne spent her freshman year with Liberal Studies at NYU in London and is now a Junior at Tisch School of the Arts Department of Dance. She has performed with Lafayette Ballet Theatre and has worked with artists from American Ballet Theatre, Pacific Northwest Ballet, Ballet Rambert, and Cincinnati Ballet, among others. Academically, she is interested in ballet history, dance writing, the links between philosophy and movement practices, and the work of Niccolo Machiavelli. 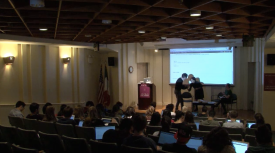